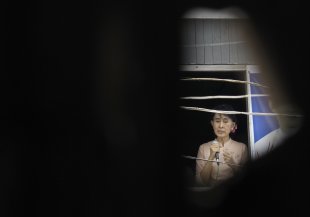 McConnell has long been a champion of democratic reforms in Suu Kyi's home country, officially known in Washington as Burma. She will receive the Congressional Gold Medal Sept. 19, accept the Atlantic Council Global Citizen Award in New York on the 21st, and speak at the McConnell Center Sept. 24.

The top Senate Republican, who invited her to speak, will be on hand at the center for her remarks.

McConnell backed President Barack Obama's decision early this year to restore diplomatic relations with Burma after that country's government recognized Suu Kyi's election to its parliament and embarked on political reforms. When the military regime had set aside her National League for Democracy's 1990 election victory, he took a lead role in crafting punishing economic sanctions meant to pry open the country's political system.

The senator recently visited Burma and had his first face-to-face meeting with Suu Kyi.

It will reportedly be her first visit to the U.S. since the 1980s.